Beginning with the 1994 publication of Lynn Nichols’ comprehensive and shocking The Rape of Europa, the world has become increasingly aware of the Nazis’ systematic looting of Europe’s art treasures during World War II. We can and should see these revelations, which seem to occur with startling frequency even seventy years after the end of the War, as an important thing. As World War II veterans and Holocaust survivors age and die, we risk losing our ability to understand the atrocities of that particular war as clearly or immediately as we should. But Nichols’ account, as well as the 2006 film version of it, and others, such as Robert Edsel’s The Monuments Men, connects one of the greatest violations of property rights in history to what may be the most egregious wholesale violation of human rights ever committed. In so doing, these recent books and films help keep fresh in our minds what can happen when good people fail to act.

Unlike the film versions of The Rape of Europa or The Monuments Men, Woman in Gold, directed by Simon Curtis and released in the United States on April 1, focuses on the story of one stolen piece of art. Painted and gilded in 1907 by Austrian artist Gustav Klimt, it is a portrait of Adele Bloch-Bauer, a member of a prominent Jewish family in Vienna.  Portrait of Adele Bloch-Bauer is a famous painting, almost immediately recognizable to anyone who has been in a museum shop; indeed, one character in the movie refers to it as a “refrigerator magnet painting.” That portrait, along with everything else of value owned by the Bloch-Bauers and other Austrian Jewish families, was stolen by the Nazis during the Anschluss in 1938. In 1941, the portrait of Mrs. Bloch-Bauer, renamed Woman in Gold in order to obfuscate its provenance, was acquired by the Austrian state and installed at the Belvedere Palace, the national museum of Austria.

Based on a true story, the film opens as Maria Altmann (Helen Mirren), Mrs. Bloch-Bauer’s niece, becomes aware of efforts across Europe in the late 1990’s to return looted artworks to the heirs of the families from whom they were taken. She engages the services of a young lawyer, a family friend named Randy Schoenberg (Ryan Reynolds), to explore the possibility of reclaiming Klimt’s portrait of her aunt. A significant obstacle, even beyond a dauntingly complicated series of legal hurdles, is that Woman in Gold is, according to a Viennese journalist, “Austria’s Mona Lisa.” Accordingly, even if Maria Altmann and Randy Schoenberg can devise a compelling legal argument, the Austrian government is determined to thwart their efforts at every step in order to keep the painting at the Belvedere Palace.

The film itself is visually compelling. There are dramatic flashbacks of both pre-War Viennese splendor and the Nazis’ cold-blooded persecution of the city’s Jewish families, distinguished by a narrow frame, softer focus and the more muted hues of mid-twentieth century Technicolor. The late ‘90’s scenes, on the other hand, are sharply focused and broadly defined, bringing us directly into the picture with Maria Altmann and Randy Schoenberg as they drive through Los Angeles and walk the streets of Vienna. Indeed, Vienna itself– more so than L.A.– becomes a character in the movie, the grandeur of its buildings and its broad boulevards drawing the audience into this beautiful city that refuses to give up its ill-gotten treasure.

There are other reasons to go to this film as well: the score by Hans Zimmer, Jonathan Pryce’s avuncular portrayal of former U.S. Supreme Court Chief Justice William Renquist, Ryan Reynolds’ solid work as Randy Schoenberg and, of course, Helen Mirren as the determined but aged Maria Altmann. Ultimately, though, it’s of more historical interest than a cinematic tour de force. It has all the hallmarks of a legal thriller, save mortal peril: a painting stolen by unrepentant bad guys, a complicated set of obstacles, lots of money at stake and, framing it all, the prospect of justice being served. But, alas, Woman in Gold is not thrilling. Instead, it’s an interesting and important film to watch on DVD or Netflix– after we’ve watched The Rape of Europa. 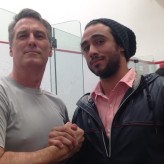